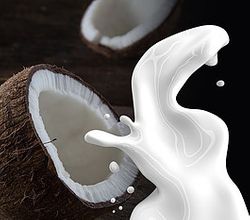 Due to two of my kids (son, J and daughter, M) having severe eczema, they are on a strict gluten free, dairy free, and egg free diet. M is also nut free, as she had been tested allergic to peanuts. We also try to stay off processed foods as much as possible, as they contain so much sugar and other additives.

So starting from this year, I decided to make our own ice cream at home, as a treat for the kids. It has become a weekly affair. They will surely remind me if I forget to feed them their weekly dose of ‘banana high’, as I call it.

Unfortunately, M developed what we believe to be a possible allergic reaction to coconut milk in the ice cream. 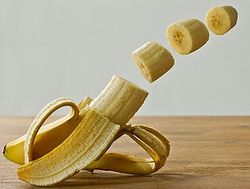 Frozen bananas form the base of this dairy free ice cream. In fact, this is all that you need, if you have nothing else at home, this is it, this will do to make your homemade ice cream. Blend it up and you’re good to go!

But as a novice, I tried to make it more fragrant, by adding coconut milk. I know the boys love coconut milk, as I have used it in our homemade pasta sauce before. But M had not tried it before. So I did tell myself to keep a lookout for her, as she has some known food allergies like egg and peanut.

As the boys chomped down their ice cream, M warily took her first mouthful, and announced with a beam,”Nice!”

Yes, due to her restricted diet, this poor, deprived girl had never tasted ice cream before this. She just turned three.

Second mouthful, followed by a third, and soon after, in a 180 degrees turn, she announced through tears, “I don’t want it anymore…”

Then started bawling. She seemed like in discomfort, and began to salivate. Seeing this sign of imminent vomiting, I quickly rushed her to the dustbin, where she gagged awhile before the contents of the three mouthfuls of ice cream came purging out.

That night, she didn’t sleep well, as her itch was up a few notches, all over her body.

The husband and I concluded that it was some allergic reaction, for which we were thankful her body knew enough to force it out of her digestive system before it wreaked further damage. If it hadn’t been purged out of her, the allergic reaction would have been much worse – swelling all over her body especially on the neck, red teary eyes, we have seen it all before. And we would worry about her breathing, as inflamed airways can block intake of oxygen, damaging the brain or even be fatal.

Knowing this must be the culprit, I chased down the packet of coconut milk from inside the refrigerator. Despite its attempts at evading arrest, justice prevailed and it was finally brought to trial. I scrutinised the ingredients list again (I had already done it before I decided to let M try out the coconut milk). Nothing suspicious turned up.

Next I scrutinised the side labels (something I missed doing earlier on, my bad). And there it was: the product was processed in a facility which also processes nuts.

Bam. Now we’re left with no definite conclusion. Was it the coconut itself that she was allergic to? Or was her body sensitive enough to pick up the traces of nuts and reacting to them? Her peanut allergy is a confirmed case, but we just try to avoid all other nuts, including coconut, until this point in time.

Coconut Allergy? Or Not?

I had always understood coconut as a different classification from other nuts, as it is not a botanical nut. It is actually a fruit. I had also done my research earlier, and learnt that coconut allergy in itself is very rare. It is also not common for people with known peanut or tree nuts allergy to be allergic to coconut as well.

Hence I established it would be worth a try, if M passes this then we can add this nutritional drink into her diet.

Now we would never know for sure, as we are reluctant to try it again. To know the answer, I would have to find another brand of coconut milk that is declared free of any other nuts, and see if she reacts. Or buy some coconuts and make coconut milk myself. But we’re not ready for that, as we know we shouldn’t test the limits too much, allergic reactions tend to get more serious each time.

So I guess we will just have to take the safer option, and take it that she IS allergic to coconut, for now. Maybe two years down the road, I may feel confident enough to splash our homemade ice cream with a bit of coconut milk that is not made in a facility that also processes other nuts. I will report back when we do that.

So now we have a girl who cries each time I say I’m making ice cream. I guess she will remember that horrid first encounter with ice cream for a long long time. And she now stirs the ice cream until it becomes banana smoothie before she is willing to eat it.

Read not just the ingredients list, but also everything on all six faces of the packaging, especially when it comes to allergies. You can never be too careful.

10 thoughts on “Allergic Reaction to Coconut Milk, or not?”