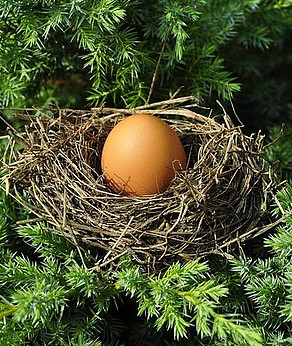 Egg allergy in eczema babies and children is such a common thing, this study has shown that about 30% of its 100 participants with atopic dermatitis, aged 2 months to 12 years old, are allergic to eggs. This is a staggering number, and calls for some well-deserved attention if your child is suffering from eczema.

Egg has been ousted from our home since my daughter, M, tested positive for egg allergy in eczema skin, based on a skin prick test when she was one and a half years old.

She had a quiet itch in the first year of her life, on her limbs and body, that didn’t pose any problem with scratching as her skin was strong then, and did not break easily. I was breastfeeding her, and egg was everywhere in my diet.

Aware of the prevalence of egg allergy, we fed her egg to try out for any reaction, before her one year vaccination, which contained traces of egg protein. Seeing that she did not have any reaction to egg, we went ahead with the vaccination. Two days later, her eczema went into a full-blown flare which never subsided for an entire year. The itch was so horrible, she just had to claw at her skin, which broke, became inflamed and painful, and so she spent her days crying in agony and frustration, and nights tossing, turning and clawing.

We thought it was the egg that we had just introduced into her diet, and never made the link to the vaccine. So we eliminated egg, but her flare showed no improvement at all. That got us really confused. With or without egg, her eczema was in a bad state of flaring.

A few months later, she did a skin prick test, which revealed an obvious egg allergy. So that gave us the conclusive signal to stop egg, but the other root cause of her flare (which was vaccine-induced) was only addressed much later when we finally tried out homeopathy on her eczema.

Now, you cannot find one single egg in our home, for fear of cross-contamination. It is very stressful to cook egg for the other members of the family, knowing how easily the utensils can get mixed up, or how a splatter of the oil used to fry the egg can get into M’s food and cause her incessant itch and sleepless nights. But when we eat out, the other kids can still enjoy the egg that they love.

The problem with egg

I love eggs. They are so tasty, no matter how they are cooked. Egg is a great source of protein (in the white), along with vitamins, minerals, and some bad guys like saturated fat and cholesterol (in the yolk). For more information about egg nutrition, check out this website: www.webmd.com.

There is plenty of research out there about the good and bad of egg. I usually take an open-minded approach, along with ‘moderation is key’. If it is not giving you any health issue (I can’t say the same for eczema warriors), then go ahead and have your egg, but do limit to one a day, otherwise you’re going too high on the fats and cholesterol. 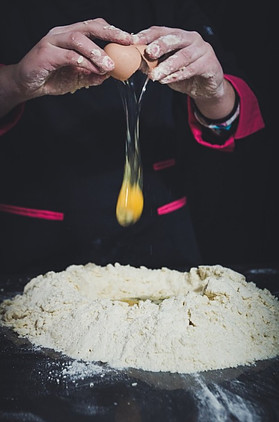 The problem lies in the egg proteins

The biggest culprit in egg that contributes to allergic reactions is the protein. In fact, a few proteins found in the egg white are capable of triggering an immune response in our body. That is why some people are specifically allergic to the egg white, and not the entire egg.

The potency of these proteins in inducing an allergic reaction is not reduced by heating or digestion. So for a child allergic to egg, it would mean eliminating many cooked foods and processed foods too, like

People with egg allergy can mostly take poultry meat without any problem.

The symptoms of egg allergy can include

More information on egg allergy can be found on these websites: farrp.unl.edu and research.bmh.manchester.ac.uk

They have a high chance of outgrowing it

Avoidance is the only way to deal with an egg allergy. The good news is, more than half of the children who have an egg allergy will outgrow it before they reach adulthood, leaving only 1% of the total adult population allergic to egg. As the child’s digestive system and immune system mature, his or her body will stop seeing the egg proteins as invaders trying to harm the body.

The other good news is, elimination of egg from your eczema child’s diet will most certainly improve the eczema symptoms, if there was an allergic reaction to egg in the first place. If the child has been tested positive for egg allergy, and yet his or her eczema is not responding to an elimination diet, then there could be other food culprits or environmental factors at play. Look into other possible causes of eczema.

If you’re thinking proteins and nutritional value, egg is not unique in delivering these goodness to us. There are many other food sources of proteins like meat, poultry, fish, beans, legumes, etc. So egg can be easily removed from anyone’s diet without any adverse effect on nutritional intake, as long as the diet is a balanced one.

If you’re thinking of how to do your baking without eggs, then these are great and healthy egg substitutes (I must write another post about egg substitutes for baking in much more detail):

So your egg-allergic child does not have to be further deprived of cakes and cookies, as long as you bake them at home from scratch, you are in total control of the ingredients, and have the liberty to make it the most healthy and tasty treat ever. In fact, there are many bakeries these days that cater to an egg free diet. But your child may have other diet restrictions like dairy free, gluten free, etc. so my personal preference is still home baked goodies for eczema warriors.

Egg allergy in eczema children is not a life sentence. With avoidance in the first few years of discovering it, the body gets a chance to build up its immune system when the allergen is not constantly attacking it. Over time, the immune system relearns to see egg proteins as friends instead of enemies. Even if the egg allergy follows some people into adulthood, egg free treats are in abundance, but for the healthiest choice, bake it yourself using the egg substitutes recommended here.