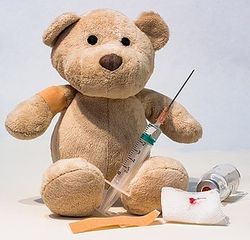 Vaccines have sparked off fierce debates in recent years, due to increasing cases of vaccine injury. Do vaccines cause eczema flare? My short answer is YES.

Our experience with vaccines

My daughter, M, had her scheduled vaccination for MMR (measles, mumps and rubella) at one year old. I had no issue at all with vaccination, even until that point. All my three older kids were vaccinated on schedule without any problems. To me, vaccination was a good thing that prevented them from getting infected with diseases that could have serious and lasting impact.

Two days after M’s MMR vaccination, her eczema broke out into a flare. I documented this in my diary, even though I did not make the connection at that point in time. This itchy and painful inflamed state became her norm. She would itch constantly, scratch to relief the itch, break her skin, which itched even more as it healed or got infected, and the cycle went on.

For one whole year, she was in an agitated state every waking moment. She demanded to be carried all the time, as she was in perpetual distress. Prior to the vaccination, she had mild eczema, scratching everyday since the day she was born, but definitely with much less intensity and never having to suffer the consequence of broken skin from the scratching.

Putting out the fire

We tried everything under the sun, some remedies helped to alleviate the symptoms, but they would stop working after a while, and we would have to try out other stuff. We had a thousand and one tubes of moisturisers, creams, oils, etc. You name it, we have it. I could have opened a shop with them. We even did steroids, which was a big mistake, but that is for another article.

Until one day, I decided to give homeopathy a try. During the two hours of first-time consultation with the homeopath, she gathered M’s history, and through it, pointed out that her eczema flared up two days after the MMR vaccination. She concluded that her never-ending eczema flare could have something to do with the vaccine. And went on to suggest that she gave M homeopathic remedies that would help to detox her from the vaccine injury.

The effect was not immediate. We saw the homeopath once a month, for about 8 months. I believe the detoxification of the vaccination helped tremendously in her healing, but the effect was masked by topical steroid withdrawal, as she purged out the toxic effects of steroid use as well. Due to all the detoxification taking place, she got worse before she got better.

After 8 to 9 months of our first visit to the homeopath, her skin cleared up and she was no longer in an inflamed state. The scars went away, and her true character could finally shine through her restored skin, and she could enjoy the childhood that every child deserves.

How did the vaccine push her eczema into a flare

Frankly, I’m not sure how exactly this happened. It could be that her immune system was already weak to begin with. And loading it with any virus pushed her into a constant state of inflammation, which was her body’s way of shouting out for help as it couldn’t deal with the onslaught of new foreign bodies, on top of the normal substances that it already saw as allergens, like eggs, peanuts, and dust mites.

Advances in science are far from uncovering all the knowledge in the world, especially when it comes to how the body works. Doctors will say vaccinations will not compromise weakened immune systems, but I question where they find the conviction from, since everyone’s body is unique in its own way, and what is medicine for some may be poison for others. 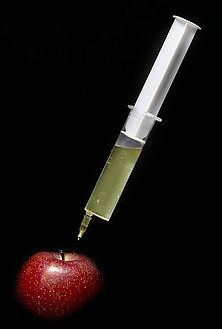 Vaccines certainly have their place in preventing major diseases, like poliomyelitis, tetanus, diphtheria, and meningitis. Thanks to advances in medicine, the mortality rate due to these serious illnesses has dropped drastically.

Then there are also vaccines for not so serious diseases, like chicken pox, the common flu, rubella, mumps, etc. which normal healthy people should be able to fight against on their own, without any intervention. During my childhood days, these were very common infections that almost everyone had to deal with, at some point or another in their lives.

The anti-vaccine groups will point to the problematic ingredients used in some vaccines, with special attention to mercury, aluminium, and formaldehyde. Mainstream medicine will argue that the form of mercury found in vaccines is not the same as that which would cause toxicity. And that aluminium and formaldehyde are in such small amounts that whatever is naturally found in food and the environment is in a much higher dose than that found in vaccines.

Another point always debated vehemently over is the statistics and evidence that revolve around vaccine injury. I have researched enough to believe there are many real cases of vaccine injury, some mild, and others much more serious. These are some related articles:

Inability to sleep, tics, seizures, convulsions, abnormal crying and screaming episodes, developmental delay, etc. are just some of the many documented cases of vaccine injury. And we’re not even talking about autism and other more serious neurological effects yet.

Mainstream doctors will undoubtedly argue that these are very rare occurrences, and that the benefits of vaccination far outweigh the little risk that it brings.

Hmmm, my trust in mainstream conventional medicine is dwindling, especially now that I understand more thoroughly that so many things in this world are the way they are due to the hidden agenda of many big entities: the big pharmaceuticals, the medical profession, the government, etc. Call me cynical, but I have learnt to trust my heart and gut more than the doctors.

My final take on this

I think it’s quite clear where I’m headed by now. Vaccinations have certainly helped the human race to progress in terms of health and mortality rate. But vaccinations may not be in the best interest of every individual. Everyone should have a right to accept or reject vaccination, it should never be forced upon us.

For my own family, with the strong presence of eczema and allergies affecting the little ones, I would err on the safe side and simply avoid vaccines. They have enough autoimmune issues to deal with, without us deliberately adding more heavy loads to their sensitive bodies.

4 thoughts on “Do Vaccines Cause Eczema Flare”